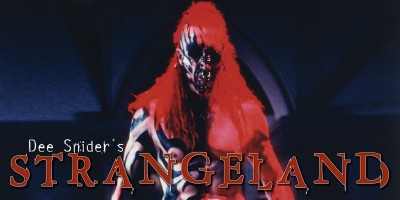 We negotiated the band Bile performing in the movie Strangeland and Cooch had two small parts in the movie. Once the movie was released, we were the merchandise company for the movie, producing T-Shirts, hats and autographed photos. Worked the movie release party at Webster Hall in NYC. Once the movie was released on DVD and video, we also sold the movie online and at events. Produced other merchandise over the years for Strangeland events. Most recently, designed elements of the DVD jacket for the 15th Anniversary DVD release and designed and produced a banner for autograph signing events.

I first worked with Cooch in 1991 in the capacity of photographer and videographer, which he did very well.  His talent, enthusiasm and creativity led me to expand my relationship with him, bringing him on as show producer for my first weekly radio show "Dee Snider's Metal Nation" the following year.  As our relationship developed and my respect and appreciation for all of his abilities grew, Cooch took on more and more important positions in my world.  As tour manager for my band, he helped me traverse the world, touring through North America and Europe.

Constantly impressing me with his wide range of talents and abilities, Cooch took over my website www.deesnider.com in 2002 and since that time has changed the site from a ego driven dalliance to the epicenter of my multi faceted career and a business generating resource.  Cooch has expanded my internet footprint to include deesniderradio.com, takebackthehorns.com. vanhelsingscurse.com, strangeland.com, and others.

As webmaster for all these sites, Cooch not only brings his talents for website organization and management, but his artistic abilities not limited only to web design. I've used his graphic art abilities for everything from merchandising, marketing, album cover design, advertising and more.  Cooch's artistry and creativity truly know no bounds.

It should be noted, that Cooch is as philanthropic as he is business minded, donating his time and effort to my various charitable efforts whenever I call.

This is a good man.

Working closely on a business level with Cooch for more than two decades has made him not only my go to guy for a myriad of business needs, but a trusted friend as well.

I highly recommend Cooch for any and all of your business needs.